Cuckoo in the Arts (poetry)

From Robert Frost's Banjo: Today’s poem is by Robert Desnos, a marvelously lyrical poet who was very much a part of the Surrealist movement in the 1920s, but who later broke with the Surrealists (& in particular André Breton). I think you'll agree that “Cuckoo” presents a lovely, fairy-tale like dreamscape. The title might be translated as “Cuckoo-Clock,” (because "coucou" in French also means the clock) but this isn’t the primary meaning, which simply refers to the bird. Of course, as I believe Eberle used to tell her writing students, “if you have a radiator & leopard skin pants, you already have a jungle,” so course you have a cuckoo clock once you have a cuckoo." 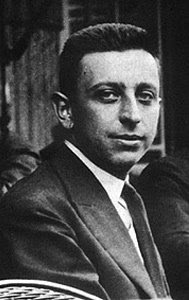 It was all as if in a childlike picture
The moon wore an opera hat that eight reflections ricocheted off
across the surface of ponds
The ghost dressed in a natty shroud
Was smoking a cigar at the window of his room
At the castlekeep's top story
Where the sagacious crow told the cats their fortunes.
There was the child in her nightgown lost in the snow's paths
Having searched inside her shoes for the silk fan and the high heels
There was the conflagration against which, immense,
The firemens' shadows stood out,
But, above all, there was the fleeing thief, a big sack on his back,
On the road the moon whitewashed
Escorted by the barking of dogs in the sleeping villages
And by the cackling of hens startled awake.
I am not rich, said the spectre flicking the ash from his cigar, I am not rich
But I'll bet a hundred bucks
He'll go far if he keeps it up.
Vanity all is vanity, answers the crow.
And what about your sister? asked the cats.
My sister has beautiful jewels and beautiful spiders
In her castle of night.
An innumerable mass of servants
Comes every night to put her to bed.
When she wakes she has a piece of cake, and witchgrass, and a toy trumpet
To blow into.
The moon laid its top hat on the earth
And that made for a dense night
Where the ghost dissolved like a sugar cube in coffee.
The thief looked a long time for his lost path
And wound up falling asleep
And nothing was left beyond the earth
Except a smoky blue sky where the moon sponged its brow
And the lost child who was walking into the stars.
Here’s your beautiful fan
And your dancing shoes,
Your grandmother's corset
And rouge for your lips
You can dance amidst stars
You can dance for the beautiful ladies
Across the array of heavenly roses
From which one falls each night
To reward the sleeper who dreamed the most beautiful dream.
Slip on your shoes and lace your corset
Put one of these roses in your bodice
And some rouge on your lips
And now sway your fan
So there still may be on earth
Nights after days
Days after nights