There's a fantastic article in the New York Times about the Morris Museum in New Jersey.  A musicologist draws connections between an 1877 Swiss music box there with Puccini's Madam Butterfly. 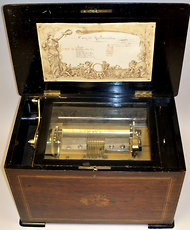 Even now few visitors spend much time in the room where the Swiss music boxes are displayed. Yet, being a musicologist, I lingered there alone last January as my children ran ahead. I kept listening to one box in particular, a harmoniphone from around 1877, equipped with a reed organ and able to play six Chinese tunes from a cylinder.

Confused at first, I suddenly realized that I had stumbled on the key to a musicological mystery many decades old. Scholars have long known that Puccini used Chinese tunes in his opera “Turandot” (set in China and left incomplete on Puccini’s death in 1924). But they have been puzzled by the origins of two “Japanese” tunes in his “Madama Butterfly” (set in Japan and first performed in 1904). What I had found were Chinese sources for two major themes in “Butterfly” and a surprising connection between that opera and “Turandot.”

Was it possible that Puccini had heard this very box in Italy and that it provided crucial inspiration for “Madama Butterfly”?

The article is a fascinating romp of detective work on an antique mechanical music box.