"Memento Mori" is a reminder of mortality. Our "All Are Mine" clock is an excellent modern example that is the result of a long tradition of clockmaker artisans who remind us that life is short, and all things must pass.

This clock tells us a story. In the upper left part of the clock, you'll see a rich man (with his bags of money and fine suit). Just above the 12:00 position, there is a carving of a king, and to his right there is a carved figure of a monk. Underneath the dial are carved representations of the young and the old; and at the bottom you can see the world. The clock bears the inscription, Alle sind mein, or "All Are Mine."

Whether you are a rich person, royalty, a man of the church, young and old, all around the world, Death will eventually come to collect you. At the top, astride the foliott balance, the personification of the End of Life swings to collect his harvest.

Along with my previous post, here are more very fine examples of Memento Mori in the world of horology: It is believed Mary gave this watch as a gift to Mary Seaton, one of her maids of honor. The skull is of silver gilt and is engraved with lines of Horace, figures of Death with his scythe and hourglass, Adam and Eve, and the Crucifixion. The lower part of the skull is pierced to emit the sound when it strikes, being cut in the form of emblems of the Crucifixion. The works occupy the brain's position in the skull fitting into a silver bell which fills the entire hollow of the skulL The hours are struck on this bell by a small hammer on a separate train. 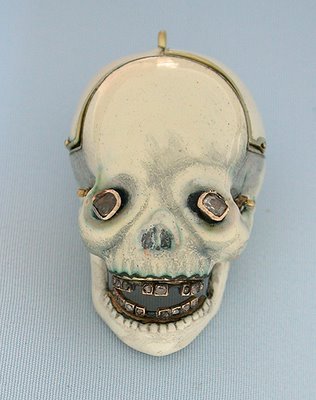 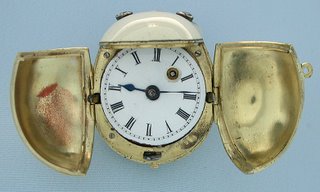 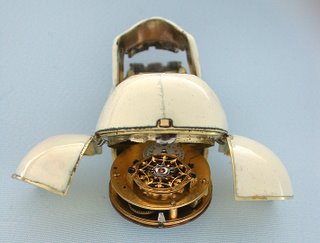 Crystal Skull Watch from Circa 1715

This skull watch/clock, circa 1715, by watchmaker James Harmar of London was carved from rock-crystal and fitted with a gold-mounted watch. Three-body skull, made of three solid pieces of rock crystal, the top and the bottom mounted in gold engraved frames, the lower frame housing the movement, the jaw articulated on the sides opening to expose the silver champlevé with Roman chapters and half-hour divisions, outer minute ring with Arabic five-minute numerals. Blued-steel, 'beetle and poker' hands. 39.5 mm o, hinged, gilt brass full plate, tulip pillars, fusee and chain for the going train, English single-footed cock pierced and engraved with symmetrical foliage and a mask in the base, rack and pinion with silver plate. Signed on the dial and movement. Dim. Length 85 mm, width 50 mm, height 80 mm. Published in the Sandberg book (Antiquorum), pages 376-377. 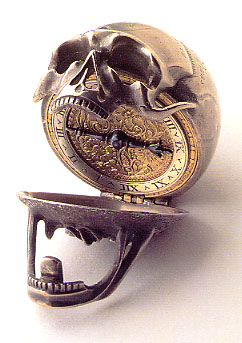 Incerta Mortis Hora - “The Hour of Death is Uncertain”

LONDON A rare memento mori clock that predates the Great Fire of London fetched a record £120,000 at auction.

The brass lantern clock, made by William Bowyer in 1623, is engraved with a skeleton on one side and Chronus, the Greek god of time, walking with his scythe, on the other. It had been expected to sell for £30,000 to £50,000.

The memento mori (remember your mortality) message reflected the preoccupation of 17th-century Puritans with divine judgment and the afterlife.

The clock, dating from the reign of James I of England (James VI of Scotland), was sold at Bonhams.

Of course, one could argue that ALL clocks are essentially reminders that time is fleeting, and that your life is being used up, one tick at a time.
Posted by rkamper at 5:20 PM