Kellogg's Wants to be a Contenter

We just got an update from our news correspondent covering the beat in Battle Creek, Michigan.

Kellogg's is starting a new advertising campaign called, "It's Morning Somewhere!" Part of their new promotion involves the construction of the next World's Largest Cuckoo Clock. They're planning a cuckoo clock that will be 66-feet tall and 28-feet wide and is being considered for a Guinness World Records® Record.

The Kellogg's® Crunchy Nut™ cuckoo clock will feature a rich, dark-wood facade and many of the traditional elements of a cuckoo clock, including an outer face with Roman numerals, a shingled roof with eaves and doors from which the Kellogg's® Crunchy Nut™ cuckoo clock character will emerge. Additional elements include decorative accoutrements, such as tree leaves and wood branches, pine-cone-shaped weights and a pendulum in the shape of a spoon.

"To bring this iconic brand to the U.S., we wanted a symbol that represented the 'It's Morning Somewhere™' campaign and the enormity of the launch," said Yuvraj Arora, senior director. "Creating this immense clock and generating an exciting experience for consumers is a fun way to introduce Kellogg's® Crunchy Nut™ cereal in the U.S. and bring our campaign to life."

We've done a series of posts about the many "Largest Cuckoo Clocks" around the world. It'll be very interesting to see how the Kellogg's example stacks up. I know that one point that the Guinness World Records® decided upon was that clocks qualifying for the "Largest Cuckoo Clock" record should be free standing. In other words, you can't just stick an electric clock movement on the side of a building and call it a large cuckoo clock. Also, we give extra props to those clocks that have a giant traditional mechanical movement to power the clock, like the one at Eble in Triberg: 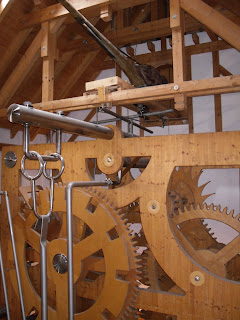 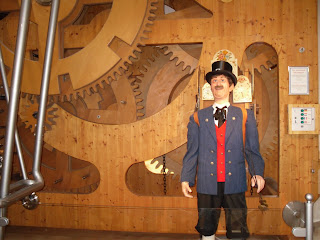 So, let's see some pictures Kellogg's! We'd love to post some sketches of the design!
Posted by rkamper at 3:35 PM