In a previous post we spoke about curious innovations made by Johann Baptist Beha, which never made it "main stream"...resulting in unique and unusual clocks left for us today.

This piece is a very early, and special shelf clock with automation made by Johann Baptist Beha in 1849. 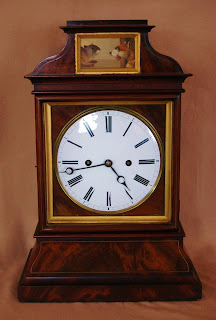 First off we would like to thank Dr. Wilhelm Schneider of Germany for his assistance in researching this piece. Dr. Schneider ,besides being the authority on the Beha factory… is also a accomplished author and a good friend.

This early Beha was made in late 1849, and sold January 1850 to Mr. Spiengelhalder a dealer from Neukirch for 19 Gulden along with one other identical piece. This is the only know surviving piece of the two. The Spiengelhalder family operated a retail store out of London during that time. (As a side note worth mentioning...Johann Baptist set up his shop in Eisenbach in 1845, this clock was made within the first 4 years of the start of his business.)

The case on this piece was made by Peter Wehrle a case maker in Dittishausen. Peter Wehrle apprenticed in Vienna…building cases for fine Vienna Regulators. This explains why this case is very refined compared with many Black Forest clocks made during the period. It also closely resembles a fine Viennese shelf clock. The case is made from the finest veneers and brass inlay… the proportions also show Peter Wehrle had a well trained eye. Peter Wehrle’s early relationship helped Johann Baptist Beha secure his name and reputation as a quality BF clock maker. 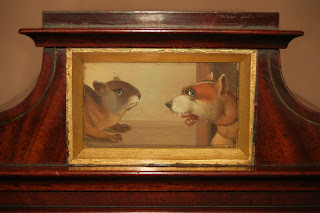 The backboard on this case is hinged at the bottom, and has a locking mechanism at the top of the back board. This was done by Peter Wehrle prior to 1854.

The movement on this clock is an early wood plate, 8 day. double fusee movement…if you look at the stop wheel on the back of the movement (see pic)… it is a very crudely made and primitive… This movement predated Johann Baptist Behas integration of the fusee and cuckoo (One of Behas greatest innovations)… and a movement that would become the staple in his quality clocks in later years.

In the Beha books, Johann Baptist Beha talks about experimenting with the 8 day fusee movement…but first incorporating blinking eyes. This is one of those pieces. 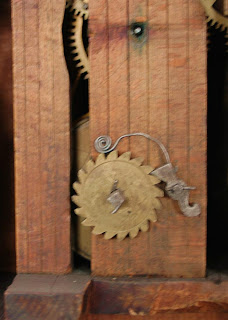 Shortly after the success Beha had on this piece, the cuckoo was added and the fusee cuckoo was born.

Above the dial in a small gilt frame, behind glass is a small 1.75 X 3.25 painting on zinc. In the painting a dog has cornered a rodent. The eye on both animals (no larger than the end of a pin head needle) move back and forth with the pendulum.

The last detail on this piece that makes the package so sweet… is a clear signature “Johann Beha in Eisenbach” done by his own hand.

We are very excited to be able to share this important piece of Beha history. 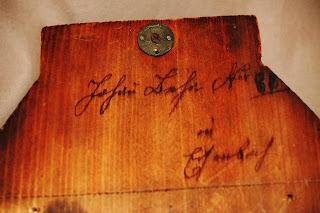