Measuring in at only 3.25 inches from the bottom of the movement to the top of the bell, this clock is the smallest clock in our collection.
This miniature, that can easily fit into the palm of your hand... is called a “Sorguhr”. 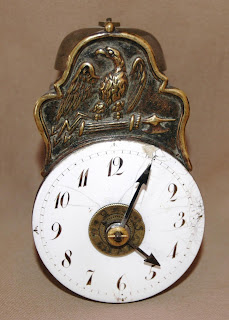 This term refers to miniature clocks patterned after those made by their inventor Joseph Sorg of Neustadt (1807-1872).
Joseph Sorg was not only a important clock maker during the first half of the 19th C., but also severed as the Mayor of Neustadt during the early 1850’s.
The styles of Sorguhren produced varied greatly. They were made in picture frame style cases..many with hammered brass frames (with or without automation), Biedermeier cases, and the more common shield style with wood or brass faces. There are also known examples cased in miniature granfather style cases no more than 20" high.

The example shown here is in the most traditional style. The clock has a round enamel dial… with the hammered brass crest. This example shows an eagle representing war… grasping arrows.

While we own several Sorguren in the collection (and will share them in future posts) this one is special.

This Sorg was made and signed by the inventor himself, Joseph Sorg. We have owned nearly a dozen Sorguhren over the years…and all are very collectible, but this is the only example we have owned that has been a true Sorg.

Joseph Sorg, although the inventor, was responsible for just a very small fraction of all the Sorguhren produced. A Sorg that is made Joseph Sorg himself , is of no comparison in rarity or value to other unsigned examples. 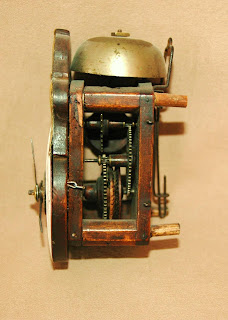 This example shown here was made by Jospeh Sorg, in Neustadt C. 1850. This example has wood arbors, and is rope drive. The movement has both the time as well as the alarm functions.
The movement measures 2.5 High (without bell) 3.25 inc. Bell 1.75 Wide 1.25 Deep
The clock is signed on the small gear that is located the front of the movement . “J. Sorg” (see pic).
We look forward to sharing other examples of Early BF miniatures in the future.
Best, 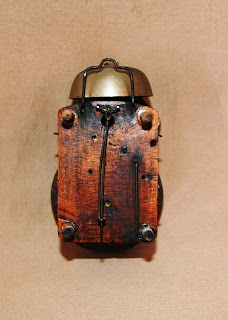